Bernie Sanders Could Win The Presidency! Brace Now For The Tax Tsunami 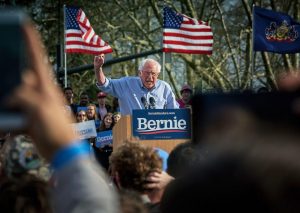 Say it ain’t’ so, Karl! No less than Karl Rove, longstanding Republican kingmaker, recently made big news by concluding that Bernie Sanders – self-declared “Democratic Socialist” – has a real shot at unseating Donald Trump in the White House next year.

Amazingly, Sanders staked this claim on no less than the Fox News Network, drawing some twice as many viewers on the conservative stronghold than for a similar appearance on the left-leaning CNN just a few months ago, according to Rove, making this event “the most-watched election event so far this cycle.” That the Bernie dog can hunt on Fox is surprising news, given viewers there are thought to more inclined to Margaret Thatcher’s  “the trouble with Socialism is you eventually run out of other people’s money” than Sander’s avowed radical vision for Robin Hood-like wealth redistribution. Robin’s mandate, as readers will recall, was to “take from the rich and give to the poor,” but as Thatcher noted, under such a scheme eventually only the poor remain. Redistributionist socialism’s carnage has a long and tattered history, with the steaming carcass of Venezuela as the current period’s most spectacular and tragic example.  Could it work in the US? Seems to me like economic voodoo, but the jury’s out, and free stuff is cool. Still, the historical record ain’t good.

While Bernie–a clear 1%-er if ever there was one – passionately claims a desire to ennoble the poor by shrinking the pies of other one percenters, he seemed to personally and unashamedly benefit from the Trump tax reform and is not particularly generous to charities with his own money.

So what’s that to you, my still-merry 1%-ish men (and bonnie maids?)  It may be time to batten down the hatches afore your wealth sub is flooded and its hull plunges to the “till there ain’t no rich no more” bottom of universal impoverishment. Regardless of which way your political tail wags, you may want to steel yourself against some of the transformative tax changes lately running up the flagpole. Here are some of the soak-the-rich ideas floating around lately, and a few derivatives likely to pop up as POTUS fever takes the land:

Millionaire Taxes. This magnanimous notion would subject those above a subjective wealth bar – $5M in income has been recently bandied about in NY – to extra taxes.  It is noteworthy that the last time NY did this – the current “millionaires’ tax” –  the bar was lowered to some $300K in forming  existing law. Current proposals in NY include a special additional property tax on second “luxury” residences, as well as an additional closing “fee” on real estate transactions over $3M. The stated use is for the subway (yeah, right, and we promise to remove the toll booths once the bridge is paid for!; note the hourly rate for NYC subway borers is some $120 (which surpasses even Germany’s) though they still can’t seem to get the darn thing done.

Property Taxes Kissin’ cousin to NY’s millionaire taxes these, as most landowners know, are nearly unavoidable, and inescapable for the reason you can’t flee to a lower tax jurisdiction, at least not with your real estate. Worse, Mother State has a perpetual, first claim lien on the dirt, and is quite wont to foreclose and redistribute for unpaid taxes. They kinda got you by the short hairs here, and it’s easy to see how such a tax could quickly get soak-the-rich progressive whilst sparing the dear voting class. Benefits-rich, deficit-doomed states like Alaska are prime candidates for such a shift, and it looks like NY is already halfway there. Of course, the net economic effect of increasing expenses without offsetting benefits would be to suppress values, wasting wealth sunk in real estate that might never return.

Stealth Corporate Taxes designed to chill stock buy backs which generally are used to juice stockholder returns similar to dividend payments.  Sanders opined in the NY Times that buybacks unfairly enrich shareholders – the owners of the companies! – at the expense of the proletariat. Proposed legislation would prohibit buybacks, and possibly dividend payments,  unless all workers are paid at least $15/hour regardless of the job or the labor market valuation of it. Beyond this stealth minimum wage boost, such policy would divert erstwhile owners’ profits to the workers’ paradise of higher wages, expanded company-paid training, and richer benefits. Such an expansion of the stakeholder model at the expense of shareholders seems likely to divert capital to less productive and accountable ends, and would certainly shave stock values to levels commensurate with the truncated returns. This  de facto bump in labor costs will surely serve to make American companies great again and crush the global competition!

Income Taxes The old chestnut of raising marginal rates – I have 70% from AOC, who’ll give me 80%? Can I get 90% from Bernie? How about you, Ms. Warren? – has become way popular again, and the drumbeat will no doubt intensify. While income taxes – unlike the rest of the social reengineering concepts enumerated here – are generally malleable and controllable by those blessed by erudite tax advice, many smart and successful taxpayers are not so blessed and stand to get whacked badly. The Trumpian tax reform could easily be upended by a shift in the political ground, and tax rates approaching 100% are not unprecedented in US history, peaking at 94% last century.

Higher Payroll Taxes to “save” Social Security and expand benefits to recipients beyond Uncle Sam’s current $1,000,000,000,000 (that’s a big $1T) annual nut. This salvation would be paid for by hiking the current FICA tax from about 12% to almost 15% – a 25% rise! – and subjecting those earning over $400K to the full FICA tax, instead of the present $133K cutoff for the Social Security part (by far the biggest piece). A supremely progressive proposal, taxes would also be cut for those below a certain means, large in number, voting power, and aggregate taxes paid, but low in fat cat income.

Estate Tax “reform.” It was not so long ago that the estate tax began for many families at the $600K mark, including life insurance proceeds. While the current threshold is a lofty $22M or so (back to $11M in 2026) this could change in a heartbeat.  Mr. Sanders has already proposed dropping this to some $3.5M, and he probably isn’t done. He’s also proposed raising the top estate tax rate to 77% from the current 40%. This author believes sharply higher estate tax exposure for many if not most readers to be extremely likely in the years to come, and that proactive tax control measures should be taken. Also suggested by several has been the elimination of the step up in basis, under which capital gains taxes are essentially waived at death. With the step up gone, affected families would face the double whammy of both estate and capital gains taxes. Gee, could they add up to more than 100%? And that’s before considering the possibility that capital gains’ favorable rates – already chipped away at in recent years – might be curtailed or eliminated entirely.

Wealth Taxes Finally, we come to the pure form of Ms. Warren’s proposed wealth tax, which would be kind of like an annual estate tax levied on the entirety of an affected family’s assets, from stocks to real estate to business to livestock. Since only the dastardly rich are targets, you’d have to have a lot of cattle to get in this game, which seems only fair given the volume of milking hoped to be at hand. A good way to visualize the concept is to contrast a sales tax (one time) with a personal property tax (like buying the same car every year) or real estate taxes. Such a tax would be a real compliance bear given the complexities of annual valuations in complicated, squishy things like businesses. On top of enormous tax prep costs, such a tax could be a real rich-soaker, for sure.

While for now, anyway, most strains of wealth tax proposals only target the mega-rich, it wouldn’t take much of a political nudge to expand that to soak the entire 1%, which would still leave 99% of the electorate to rally around a “you deserve it!” campaign trail cry. Shoot, you could soak the top 10% and still have plenty of electoral hay left.

Nothing is so constant in tax policy as change. While many or most of the changes discussed here may not come to pass, one never knows, and the wise would be carefully ready with plans B. Tax policy is a political football, the right vs. left game is on with a vehemence perhaps not seen since the old New Deal was young, and, if nothing else, we are blessed to be living in truly exciting times.