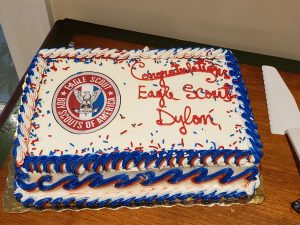 This past month, our son, Dylan, received the Eagle Scout Award.   We held a small ceremony at our home that was attended by family, friends and members of Troop 812.  This achievement is a testament to his character throughout his scouting journey, and it demonstrates his drive and focus.   Dylan began his scouting journey as a Tiger in first grade.   Jeff shared his progression as his Den Leader, and later as a merit badge counselor.  His mother, Kim often served as assistant Den Leader, Cubmaster, or Pinewood Derby Chair. 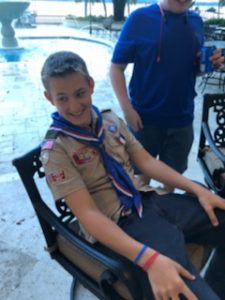 Making Eagle Scout is no small thing. It is a rare accomplishment and an exclusive group to belong to. It has been called the PhD of boyhood because knowledge and experience goes far beyond what is or could be taught in school. For Eagle, Dylan learned about money and had to run a budget for three months. He had to plan and execute a work schedule for another three months. He learned to cook, and to sell, and to speak publicly. He observed the political process from local meetings to the world stage. This is just a small slice of the Eagle program. He learned so much, and finally he created an enduring project that the St Johns Country Day School will benefit from for years to come.  Even more remarkable is completing it at the tender age of 14. This takes real drive and commitment. Many don’t make it by the cutoff of 18 and we are so very proud of him.  Congratulations Dylan!