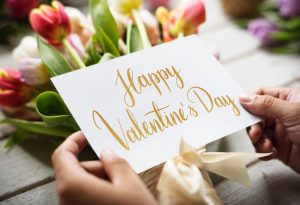 Although millions of us exchange cards, flowers and gifts with our loved ones on Valentine’s Day, few are familiar with the legend behind the event. St. Valentine dates back to the third century in Rome. While the details are unclear, we know that this patron saint was recognized for his heroic and romantic deeds.

According to one legend, Valentine was a priest who defied Emperor Claudius II by secretly performing marriages for young lovers. Since the Emperor had outlawed marriage to make single men better soldiers, Valentine was imprisoned and eventually put to death. While in prison, it is said that Valentine fell in love with the jailor’s daughter. He wrote to her before he died, signing the letter ‘From your Valentine’.

This year, emulate St. Valentine. Instead of sending one of the192 million Valentine’s Day cards that Hallmark says are exchanged annually, go the extra mile by finding a new and creative way to show how much you care.