Tech Stocks Plunge 5%…Is the Stock Bubble Beginning to Burst? 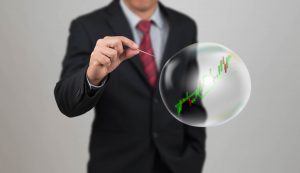 It’ll come as no surprise to most of you that it’s been a pretty traumatic day in the markets. Significant drops across the board. Nasdaq pulling back five percent- which is a huge deal. This is the technology heavy sector in our view way overextended Apple, Microsoft and Google, Facebook, all trading crazy valuations. Not that they’re not great companies. But she was. And just things don’t go straight up untethered from economic reality. But in any event, I thought this would be a good time to kind of refocus on what our strategy is going forward.

These are unprecedented times and we’re more concerned with protecting client value and retirement ability, wherewithal for the long term,  and for the rest of your lives than any particular valuations at one point in time in this crazy year, which we think is really stretch, which is why we’ve kept so much dry powder. We think there’s a significant risk of a market plunge just because the stock market value is completely, in our view, divorced from the underlying economic reality that the priest prices just aren’t justified.

It’s kind of a speculative fervor. It’s a bubble. And a lot of you may not remember what a bubble is. It’s really a period where price increases, people just pay higher, higher, higher thinking that is going to go up forever and ever — until the music stops and somebody is stuck without a chair to sit down on. And you may be reminded of the South Sea bubble from history back in grade school or the tulip frenzy in Holland.

Remember where people go crazy for the price of a tulip and just go up higher, higher and higher until  the worth is a hundred thousand dollars and the market fell apart. That’s what a bubble is. Bubbles occur in all kinds of investment and asset levels. And I think this is a stock market bubble right now. So, again, that’s our underlying objective is to help guide you through the stormiest financial crises that we think will be more than you’ll ever see in a lifetime. We’re in it now and we will get you through to the other side with value intact so you can realize your financial objectives—and to not  show a real high number September 30 statement.

It really is what it’s not– what it really is what you keep and get to spend. It matters. And that’s our objective. I’d like to read you a couple of editorials, one from today’s Wall Street Journal and another one recently from CNBC, compliments of my younger brother, Michael, a Yale man or devil to channel.

Jim Backus and Gilligan’s Island and others are the drama. And so we interrupt this regularly scheduled presidential campaign for a word from your bill collector. The spoilsports of the Congressional Budget Office reported Wednesday was just yesterday that the US government will soon have a debt burden equal to America’s entire gross domestic product. A huge number. Congratulations, they say, on this Italian style fiscal milestone. One way or the other, we’ll be paying this off for the rest of our lives.

The Congressional Budget Office reports that the locked down recession and explosion of spending this year, and ain’t over yet –will increase the budget deficit for fiscal 2020, which ends soon to 3.3 trillion dollars and 16 percent of GDP. This would be the largest annual deficit since 1945 when there was merely a world war. The pandemic has become the fiscal equivalent of a war thanks to the economic lockdown’s and the competition by both parties to ease voter anxieties with cash in an election year.

The political class seems to agree this is a price worth paying, since neither party wants to talk about it in their election campaign. The fight over the next phase of coronavirus relief has been whether to spend another three trillion to House Democrats or merely one trillion the White House. Either of those numbers would send the deficit higher than the eight point six percent of GDP that CBO projects for fiscal 2021. We won’t focus –will not mention this, but it doesn’t matter whether your name.

But we thought some of. Our younger readers or viewers still anticipating their prime earning years might appreciate a look at the bar tab. CBO says federal debt held by the public will hit 98 percent of GDP this year. Debt held by the public is important because the amount Americans pay back with interest to Congressional Budget Office CBO public debt estimates don’t include entitlements like Social Security and Medicare, which are political promises rather than a binding contract, which means the actual debt is much, much bigger.

They also exclude the liabilities of Fannie Mae and Freddie Mac, the housing giants guaranteed by taxpayers,  and they don’t include the one point five trillion or so in student loan debt that may wind up in taxpayers lap if Joe Biden wins. It’s important to appreciate how fast this increase has happened, the pace of spending picked up across the George W. Bush years, but that stayed pretty much under control.

Then came the 2008 2009 recession, which Barack Obama, Nancy Pelosi addressed with a spending blowout and the slowest economic recovery since the 1930s.

Public debt hit 76.4 percent of GDP by the time Mr. Obama left office, and it kept rising. During President Trump’s first three years to 79.2 percent. And again, this is a political misreading. The Journal, if anything, is certainly not particularly politically aligned, then the pandemic hits on present trend, that is, without another trillion dollar bonanza, just on the present trend—then I think it’s going to get worse.

Debt will exceed 100 percent of GDP in 2021 and reach 170 percent in 2023. That will be the highest in U.S. history, exceeding the previous peak in 1946 at the end of the war to save Western civilization. Put another way- the US government will soon owe more than the American economy produces in a year, which is a lot of money– a lot.

And optimists might say we can again gradually slow spending growth as we did after World War Two. But that was before the rise of the entitlement state and it’s growing claims on tax revenue to pay retirees. Good luck reforming those programs. Now that the baby boomers are retiring by the voting millions, defense spending is already down to a low three point three percent of GDP, a significantly rising global threats. So don’t look to get any money from the defense budget.

They say that it leaves the modern monetary theory. That Miracle basically says you can print as much money as you want and it doesn’t matter. Well, I think it does, which includes, the journal says, keeping interest rates at zero or negative for as long as possible. This will make financing the debt easier, though. It also makes annual deficits politically easier to run if modern monetary theory leads to inflation. And I think it certainly will, that would shrink the debt in real terms, albeit by also hurting creditors and savers.

This is probably the likely outcome. That’s basically the dollar plunges, right? You pay it back with less and less valuable dollars. The dollars are already dropping like a rock on world markets. And I think that is really just beginning it’s plunge, which is a bad thing. Right. So that means that if things become much, much more expensive, you maybe have to go with a 15 dollar McDonald’s hamburger.

To put things in context, back to the journal stories.

Sorry to spoil the spending fun, but there’s no such thing as a free bar. And even the US, with all its economic power, can’t keep piling up debt forever. No one wants to think about it now, but eventually, an old friend, Adam Smith’s Wealth of Nations economic genius, 18th century genius will come calling to collect his inevitable and penniless speed. And in other words, it’s probably going to hit the fan. We are going to be in the woods along top this if you’re still watching.

You know, it’s an awfully long winded here from CNBC, compliments of you brother Michael. Asset prices could be on the cusp of a sharp collects collapse known as the Minsky moment and may retest lows last seen in March. According to Ron William, market strategist and founder RW Advisory markets have experienced a broad bullish period in recent months, and markets are running right up as investors betting for the stimulus from governments and central banks and the prospect of coronavirus vaccine despite lingering global economic risks from the current pandemic and geopolitical tensions Wednesday saw that was just yesterday before today’s Thursday’s plunge.